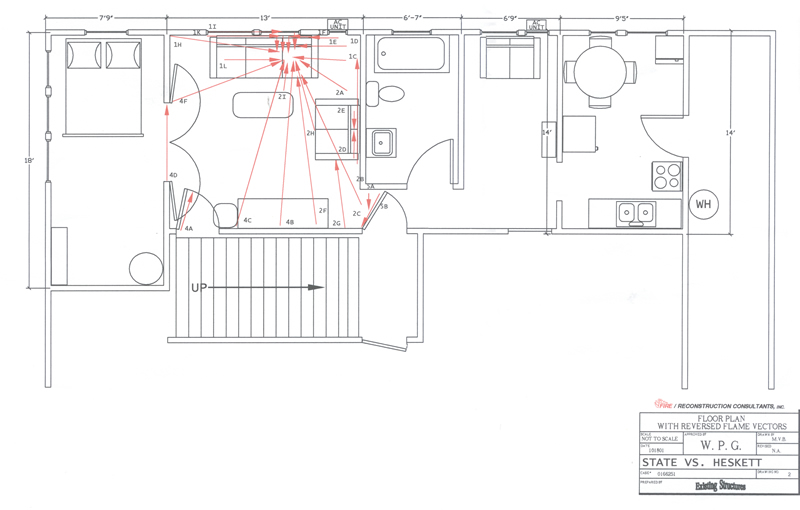 This case of an alleged First Degree Arson Murder came to Fire Reconstruction Consultants, Inc. from

“During the course of the past 15 years I have had the opportunity to work with dozens of criminal investigators and expert witnesses. I can state with confidence that Mr. Godfrey’s dedication, attention to detail and over all skill exceeds that of just about any other investigator/expert witness that I have worked with while practicing as a criminal defense attorney.”

Mr. Godfrey and I worked together on a First Degree Murder Case that I had been appointed to nearly a year after the incident occurred. The crime scene had long since been destroyed along with any evidence pertinent to the defense. Fortunately, due to the expertise of Mr. Godfrey, using photographs, architectural drawings, survey and other public records we were able to re-create the scene. Mr. Godfrey’s re-creation of the scene along with his knowledge of arson investigation, flame vector analysis, fire science and burn pattern analysis ultimately led to a factual determination that the fire that caused the death in this alleged First Degree Arson Murder was in fact not an arson. After ten days in trial and Mr. Godfrey’s expert testimony the Jury found the defendant NOT GUILTY which was one of only two or three not guilty verdicts on a First Degree Murder in Pinellas County, Florida in the past twenty years.

I have no doubt that without the dedication and skill of Mr. Godfrey, who took a very personal interest in the case, this result would have been very difficult if not impossible to achieve.

The defendant was arrested and charged with Arson and First Degree Murder. She spent two and one half years in the county jail awaiting trial.

In order to kill her abusive boyfriend it was alleged that the defendant poured an ignitable liquid on areas of the floor. She is then alleged to have ignited the material on the steps leading upstairs to their apartment and running down the stairs and across the street, completely nude to a friend’s house to report the apartment on fire. Her dog also died in the fire and she left all of her clothes, her pocket book with all of her money, identification, etc. Using an Arson Detection Canine, fifteen samples were taken from the apartment for chemical testing. Thirteen were documented by photographs showing the general location of each sample and were marked in blue on the floor plan. The other two were never photographed nor were the locations ever documented in any manner. There was never any photographs taken showing exactly – what – was placed in the evidence cans for testing, nor were there any measurements taken documenting the exact location of the various samples. Of the fifteen samples tested only sample number six was identified as containing a Class Three Ignitable Liquid. The local police crime laboratory never tried to identify the exact substance in sample number six (Class Three Ignitable: Is a class – made – up of such diverse compounds as kerosene, charcoal lighter fluid, insecticides, mineral sprits and the natural decomposition by products of many plastics and foam rubber products.) There were also some two hundred plus photographs taken of the scene and deceased by either the fire department or police department.

FACTS DEVELOPED EARLY DURING OUR INVESTIGATION

The defendant and her boyfriend had been out celebrating her birthday at several bars. They returned to the apartment around 10:00 PM. He was tired and went to bed and she stayed up to watch television in the living room until 10:30 or 10:45 PM. At that time she went to bed. She had been lying and sitting on the couch located along the south wall of the living room with her head toward the west wall and smoked some cigarettes while watching television.

At approximately 12:37 AM she awoke in the bedroom feeling like she was choking, only to find smoke just above her face as she lay on her back on the bed. She woke up her boyfriend, with difficulty, telling him the apartment was on fire, got up and ran for the front door. As she crossed through the living room bent over so she could see where she was going, she saw a red glow to her left and felt heat on the left side of her face and head. The hair on the left side of her head was singed. She went out the front door, leaving it open, down the stairs and across the street to her friend’s house, woke her friend and her friend’s husband and he called the fire department at 12:42 AM.

Within seconds after she left the apartment door open, the living room flashed over, trapping her boyfriend and dog just inside the entrance to the bedroom where they both expired. Autopsy reports indicate that her boyfriend had an extremely enlarged heart and probably died from stress. There was little to no smoke or soot in his esophagus and lungs indicating that he did not die from smoke inhalation even though he had an elevated carbon monoxide level in his blood.

Results of our analysis indicated that the fire started on the west end of the living room sofa where a distinct incubation hole was found in the cushions indicating an accidental fire with a single origin.