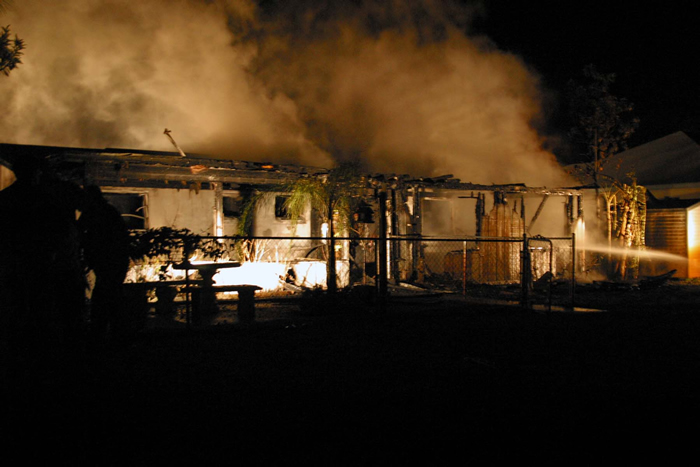 After an extensive search for a fire expert, Attorney David Chesnut hired Walt Godfrey through TASA as his fire expert on a residential fire death case. He represented the homeowner whose wife had died in the fire. Mr. Chesnut had this to say about Walt Godfrey after a very successful settlement in his Client’s favor. “ We had Excellent Results. Walt was an Excellent Fire Expert. He made the case for us and brought it home”

The residence was a rectangular single-family structure constructed predominately of CBS with wood trusses. Attached to the rear of this structure was an addition consisting of a “Florida Room” and screen room constructed of wood. The Screen and “Florida’ rooms evidenced the heaviest damage. The interior of the structure had heavy smoke damage throughout, with the heaviest fire damage in the rear Florida and screen rooms and extending into the kitchen, living room, utility and garage areas located on the west side of the structure. The east side of the structure housed the bedrooms, the room in which the victim was found was the master bedroom which adjoined a master bath, closet and hallway which served as the primary means of exit.

Even though it had been two years since the fire, the structure was still in place. Walt Godfrey conducted a complete fire scene investigation with the assistance of his forensic photographer. He determined where the fire started and located the origin of the fire. It was also opined that a popular electric space heater had caused the fire.

As part of his normal investigative techniques he always tries to get all the information he can on the product, piece of equipment, plans of the building or complete drawings of the vessel in question. The manufacturer of the heater was contacted for information, they stated there was no documentation concerning the heater, because, “that model was designed many years ago and no specific design drawings remain”.

During the course of the investigation it was determined that the heater had been recalled. The Recall alert was in the January 2006 issue of Good Housekeeping magazine, which referenced the heaters. It read “Recall alerts – Are there unsafe products in your home? Check the list below. These items were recalled by manufacturer’s in cooperation with the U.S. Consumer Product Safety Commission. And there was the heater, and also listed were the places where they were sold and it stated the problem was the “power cord on the units can fray or sever, causing the fan to stop working and to overheat, posing a fire hazard.”

The Attorney’s and Walt Godfrey looked all over the U.S. and Canada and could not find another heater like the one that caused the fire. An extra bonus to the case was when Walt Godfrey was in a conference with another attorney on another case in their office and he noticed a heater. He asked if he could examine it and it turned out to be the model of the same heater in the fire. Needless to say, after Walt told the attorney about the case he was working on and about the recall of the heater the attorney offered the heater to Walt. He was then able to compare the burned heater to the working one he had acquired.

After Walt read the depositions of all parties concerned, he gave a video deposition. Mr. Chestnut advised us that Mr. Godfrey’s testimony was instrumental in the very successful pre-trial settlement, (thus avoiding any further expenses of a trial), in favor of the plaintiff and “brought the case home”.